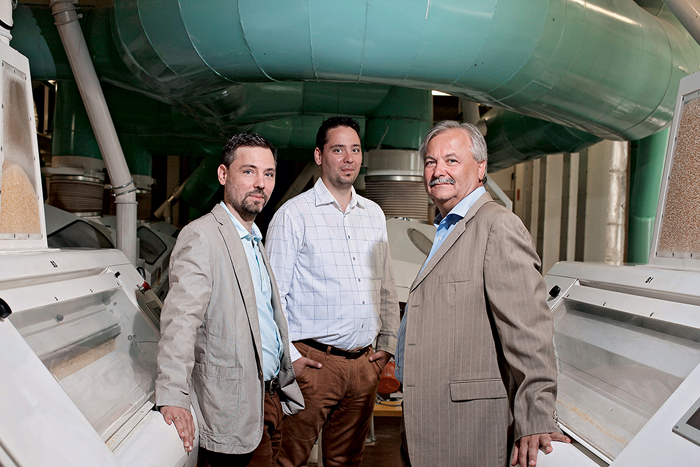 For the corn processing company Agri-Corn Kft., future plans primarily focus on increasing export. If everything goes according to plan, its exports will double in three years.

László Vaszkó and his wife, Mária Kerek Vaszkó, decided to build a corn mill in 1992, not long after the regime change. Their first big business deal was with Biogal, as the pharmaceutical company needed new Hungarian contractors to produce neomycin, a material made from corn flour. The family business thus became a supplier, but this business relationship did not last. The client soon cancelled the programme, causing the Vaszkó family business to lose its only customer.

It was time to re-think their business model. First, they had to research potential ground corn customers all over the world. The market itself is relatively small, as people do not eat much corn in Europe or in other parts of the world.

In the years of hardship, the fact that the family also owned a pig farm and an event-planning company was a great help. If one company in the group did not do so well, the others helped it get through the hard times.

In the late 1990s, when the Dutch beer companies first came to Hungary, Agri-Corn was looking for a way out. As barley is hard to come by in the homeland of these companies, their products are mainly made from corn. In order to enter this new beer market segment, Agri-Corn adapted its mill, buying new fourth-generation machines. The company is still characterised by this flexibility: they innovate continuously to adapt to market changes.

Around the turn of the millennium, when the Hungarian snack industry started to expand, the company bought machines that could process smaller grains. With time, they built new silos, an oil factory, and a drier – the latter being heated by biomass for sustainability. As for financing these developments, the ratio of loans is rarely more than 30%. Along with the Monostorpály mill – a HUF 1.2 billion, 2,200 m2 factory that produces gluten-free pastry, and one of the three biggest in Europe – was opened in 2014. As the company points out, competition on the gluten-free product market is intense. Many of the new actors do not care about quality, therefore chemical-laden gluten-free products often find their way into stores. At Agri-Corn however, special attention is paid to the nutritional value of their products and to ensuring that they are truly healthy.

The company’s development is characterised by the fact that its turnover increased from HUF 835 million to HUF 2.5 billion in ten years, and it is constantly innovating. For example, last year, they introduced a new technology that can be used to produce additive-free corn flour with a high fibre content – a world first.

The next big step will be increasing export. They primarily intend to open their business towards Western Europe. Export currently accounts for 40% of their turnover, an amount which they plan to increase to 80% over the next three years. They are even considering expanding by acquiring other companies in the sector. Due to the excellent quality corn flour, Agri-Corn’s clientele now includes Italian pasta factories. They also export to Romania, England, and Poland.

Intergenerational succession is also an important challenge for the company. The founder, László Vaszkó, still takes part in decisions related to expansion and other strategic issues, but has handed over operative management to the younger generation. His son, Gábor Vaszkó, underlines the importance of gaining a wide range of information regarding any new opportunities. It is for this reason that they joined the Elite business development programme of the Budapest Stock Exchange and the London Stock Exchange Group. They expect that this will help to broaden their horizons, and also find it important to communicate with other Hungarian and international companies, as they can gain inspiration from one another’s experiences in order to address challenges that arise. His brother, Péter Vaszkó, is also an integral part of the family business: he always knew that he would work in his parents’ milling company. The two brothers took over the reins of the company’s operative management together.

Regarding their challenges, Gábor Vaszkó said that although they do notice the prevailing lack of qualified workers in Hungary, they are able to manage the situation well. Due to their friendly work environment, employee turnover is low at the company. Workers are encouraged to ask questions and get immediate feedback. The fact that most employees have been working for the company for more than 10 years speaks volumes. But the company also promotes the development of the next generation of employees and lifelong learning. They cooperate with the University of Debrecen in a dual training/internship programme, and they regularly organise study trips abroad for their employees. They generally train their millers in-house, as apprentices are taught by more experienced employees.

However, there is another important factor that the entire industry will have to consider in the long run: climate change. Corn-growing areas are continuously shifting north. In Italy for example, no toxin-free corn is currently being grown in the Po valley because of the late rains. In Poland however, where there was no production a few years ago, there are now corn mills. “We’re considering buying one or two of them at some point”, adds Gábor Vaszkó.

In Hungary, farmers are not yet suffering from the effects of global warming. But as Agri-Corn points out, we still not exploiting all of our potential. Corn production may even increase in the near future.